Earlier, we saw a simple example of how to call a function in the WoW client using the GetPlayerGuid function. Now we're going to take a look at one of the most useful functions for our bot: EnumerateVisibleObjects.

Remember when I mentioned the different calling conventions available in C/C++? Up to this point we haven't had to worry about it because our first function GetPlayerGuid didn't take any parameters. The new EnumerableVisibleObjects has both parameters and a return value so we're going to need to think about calling convention here.

Remember that the default calling convention from C# is Stdcall and we can override that with the UnmanagedFunctionPointer annotation. The EnumerateVisibleObjects function uses Fastcall, so we're going to need to deviate from C#'s default behavior. Unfortunately, C# doesn't support Fastcall (check out the API docs on MSDN), so we're going to have to get creative.

Make sure you set the output directory of the project to ..\Bot\ so that it ends up in the same place as the rest of our bot's dependencies.

The one thing worth noting here is the line extern "C". This post on stackoverflow has a good explanation, but the gist is: the C++ compiler performs "name mangling" to support function overloading, but that makes it difficult to identify the function by name when using DllImport from C#. So extern "C" disables that name mangling.

With that done, let's wire up the EnumerateVisibleObjects method in the Functions class.

Notice that unlike GetPlayerGuid, instead of using Marshal.GetDelegateForFunctionPointer, we're going through our Fastcall library, so we have to import that using DllImport and specifying the entry point (this would be the failure point if we didn't use extern "C" as mentioned above). Also note that we don't need to specify a calling convention here because the default is Stdcall and that's what our Fastcall library uses to wrap the internal Fastcall function.

The guid of an object isn't that useful to us. What we really want is a pointer to the object in memory so we can read from offsets from that memory address to find interesting values associated with the object. Thankfully the WoW client exposes a function called GetObjectPtr that takes a GUID as a single parameter and returns a pointer to that game object. Here's the code:

Notice the lack of [UnmanagedFunctionPointer(CallingConvention.StdCall)] annotating the delegate. In this case, the GetObjectPtr function is implemented using Stdcall in the WoW client so we can defer to C#'s default behavior.

All objects in WoW have a "type". There are obvious differences between an Item and a Player. These different types of objects all have a place in an object inheritance hierarchy. We will explore that hierarchy fully down the road, but for now, let's outline what the different types are using an enum, and define a base class WoWObject that holds a few properties that all objects in the game share.

There are 8 different object types in the WoW client, so we define those all in the enum. Every object in the game has a GUID, a Pointer to the object, and an ObjectType, so we add those as properties to the WoWObject class. Eventually we'll inherit from this base class when we create classes for items, players, etc, and those derived classes will have their own specific properties and methods.

There's one more thing to talk about before showing the ObjectManager. Remember that the we pass a callback function to the EnumerateVisibleObjects function, then that function calls our callback passing in the object's GUID as a parameter which we then pass to GetObjectPtr to get a pointer to the object in memory. From there, we'll use the same principles that allowed us to find the Player's health in BloogsQuest from the first few chapters to find the WoW object's values in memory near the object's starting address. The first thing we'll find is the object's type, and to do that we need to know the offset of the ObjectType property from the start of the object in memory.

We also need a slightly different approach for reading memory from that location. In previous examples we used ReadProcessMemory, but now that we're in-process that isn't necessary. Instead we can simply dereference the pointer, but in order to do so we'll need to be operating in an unsafe context. Here's an MSDN article that talks about working with pointers from C# if you want to learn more. In our case, we're going to create a new class called MemoryManager that we'll use to do our pointer dereferencing, and we'll also need to turn on the unsafe code flag for our project. The class doesn't have much, but we'll build on it as we move forward:

The type of an object is stored as a byte offset 0x14 from the object's starting address, so the MemoryReader class has a single method that reads from an address and parses the value as a byte.

There are a few interesting things to mention here. First, MemoryManager is static for the same reason that we made Functions static earlier - we only ever need one, and we don't want to have to manage passing around a reference everywhere. Second, MemoryManager is marked as unsafe - this allows us to do direct pointer dereferencing from C#. And finally, notice the [HandleProcessCorruptedStateExceptions] annotation. Manually manipulating pointers is inherently dangerous - trying to dereference a null pointer will cause your program to crash. And this isn't something that the .NET Framework is equipped to handle by default. So if for some reason we call ReadByte and pass in a bad memory address (null pointer, or a memory address in protected memory for example) - our program will crash, even if we wrap this in a try/catch. But by using the [HandleProcessCorruptedStateExceptions] annotation, the .NET Framework WILL be able to recover from bad pointer dereferences! Such problems will throw an AccessViolationException, so that's what we catch here.

Now we're going to add the ObjectManager class. This class is responsible for defining the callback function and passing that to EnumerateVisibleObjects, then maintaining a list of all the game objects that were found. Here's the code for that class:

The callback is the interesting part. Like I mentioned earlier, WoW's EnumerateVisibleObjects function will call our callback for every object visible to the Player, so it's up to us to specify what we want to do with that object. For now, we'll just be adding all the objects to a list. But first we need to get the object's pointer which we do by calling GetObjectPtr. From there, we retrieve the ObjectType using our memory reader, reading from a 0x14 offset from the object's pointer.

We're ready for a test. In our ViewModel, let's change the Test button to call EnumerateVisibleObjects then print some results to the log. Here's the new code in the ViewModel: 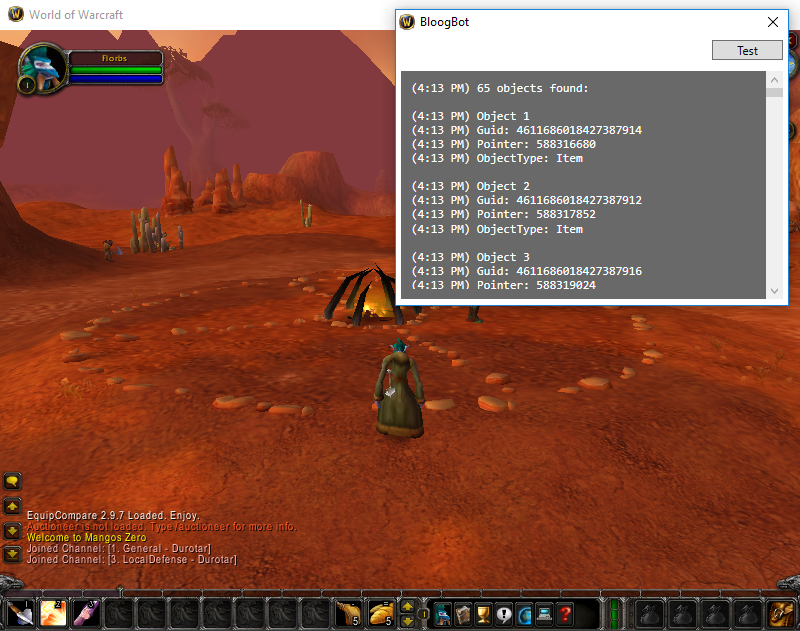 We found 65 objects! The first few are of type Item, but if you scroll down in that list you'll see others.

We've added quite a bit of new code to our solution in this section, so here's an overview of how I have things organized: 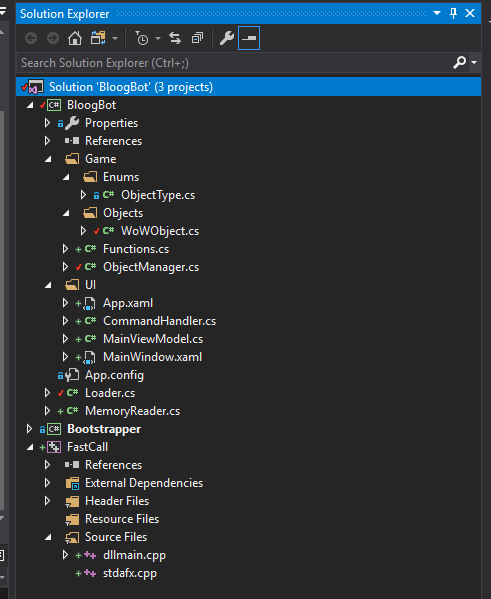 In the next chapter we'll create some derived classes that inherit from the base WoWObject class and beef up the ObjectManager class to let us find what we're looking for more easily.